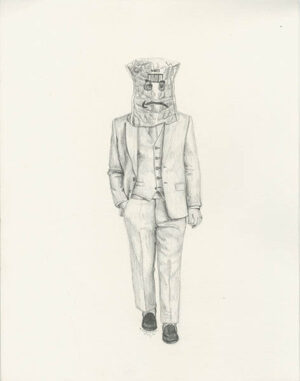 Peter Adamyan was born and raised in the suburbs of Los Angeles. Growing up around the materialistic and superficial culture ingrained so heavily in the shadow of Hollywood, this served as perfect inspiration and fuel for his inherent aversion to such a consumer obsessed society.

Early on, Adamyan utilized pop-culture imagery as a form of symbolism to comment on society through unlikely narratives. Highly critical of religion, mass consumerism and the general the darker side of human nature, Adamyan’s early work strives to raise the questions that no one wants to ask. Displaying clear social critiques through layered imagery, his series touched on everything from the perversions of religion to the racism that has thrived to this day from the colonization of the Americas. Done in a relief style on wood, these works created a collage of imagery to create a larger discussion about our modern world.

After re-locating to an industrial area in Oakland, CA, he found a stark contrast to his suburban upbringing. He also noticed that people used his neighborhood as an illegal dump. Simultaneously at this time, he was spending more time in nature, backpacking, foraging and fishing. These two contrasting worlds inspired his current body of work. Using oil paint and found materials, Adamyan creates work that is nostalgic for a time when people lived more harmoniously with the earth.

Through his critical lens, Adamyan’s new series is meant to provoke and prod at our cushy, consumer driven world while pulling inspiration from the natural one. Returning again to recognizable imagery, this work shifts to represent hunter gatherer societies, religious iconography and environmentalists of past and present, thus incorporating an environmental message as well.