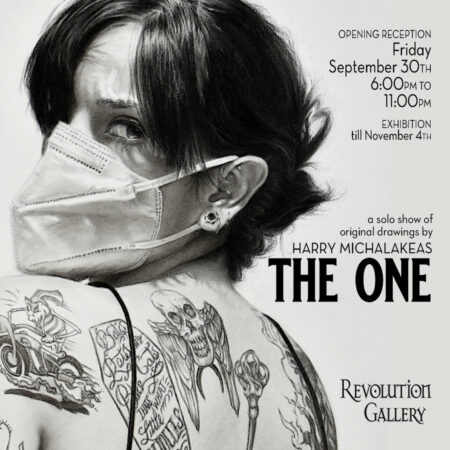 THE ONE – a solo show of new drawings
by Harry Michalakeas

‘The One’ is a vampire story. We meet the vampire who begins the cycle, and learn a bit about her ravenous nature. Then we meet ‘The One’, the special victim who rather than being drained, the Vampire has chosen to pass her gift to. The Vampire then bites The One, who becomes infected and transforms into a vampire. The tale ends with The One biting a new victim, continuing the cycle.

When I was a kid growing up in England, there were two comics called The Beano and The Dandy which were popular. We had them delivered, and one of my fondest memories of childhood is of getting home from school and my new Beano or Dandy would be there in my room. Falling into that world influenced me a great deal artistically. It introduced me to the idea of using art not just to portray things, but to tell a story. Telling a story through a limited number of panels really distills storytelling down to its essence. First this happened, then this, then this, the end. There is a purity to that. It’s how a young child might tell a story. My love of comics resulted in my first art sales. I would draw my own little one page comics and sell them to other students at school. I approached ‘The One’ the same way I approached my comics. I wanted each piece to be a moment in a larger story, but in this case, also stand by itself.

If a viewer only sees ‘The One’ as a vampire story, then I am perfectly happy. Creating cool imagery and using those images to tell a story is a huge part of my motivation for being an artist. But for me, it was also a story about the pandemic. I didn’t want to shy away from these difficult times we’ve been living through, and I wanted my art to reflect the world it was created in. I knew almost from day one that I wanted a masked victim, even though I knew this would set the show in a specific period in time. As an artist, I was fascinated by how much stronger the emotion conveyed by the subject’s eyes and body language was when that was the only thing you could see, and wanted to leverage that in my art. But in addition to being set in the pandemic, the tale is a metaphor for the pandemic itself. A deadly virus spreading from person to person. Even more alarming, people changing and becoming something other than themselves. The decision to leave everything on a white background was an attempt to capture that slightly mad, disorienting white room feeling. That was how the earlier part of the pandemic felt to me during the lockdowns, as if the rest of the world had disappeared.

One of the most frightening aspects of vampire mythology is the loss of self. The victim gains immortality, but the catch is that it isn’t them that gains it; the old personality withers away and is replaced by the new vampire one. This theme of identity threatened occurs over and over again in my earlier work, and that is a story which I continue here, as ‘The One’ is turned and loses herself. In one of the pieces, ‘Things Die’, we see her bloody hand holding a dying rose, representing the remnants of her old self.

Finally, this show is dedicated to my Mom. Not only did she teach me to draw when I was very young, but she was unfailingly supportive throughout my childhood. Unfortunately, cancer took her early, when she was still only in her forties, but she is still here with me when I am doing my art. My only regret about this show is that she isn’t here to see it.